In the world of women’s skis, the Volkl Kenja is a force to reckon with. There’s absolutely no two ways about it. This ski, which is designed purposely for an aggressive female skier, provides, among other things, the stability, edge hold, power, floatation and grip needed to enjoy a comfortable ride and boost performance.

The Volkl Kenja Women’s Skis review prepared for you below will aid you in getting a better understanding about all that this ski has to offer you whenever you hit the slopes with it.

Read below our in-depth review of  Volkl Kenja Women’s Skis.

The Kenja’s 90mm waist allows it to move easily and quickly when engaging in frontside carves. Also, this waist width helps in boosting the ski’s performance off the groomers by contributing significantly to its ability to stay afloat.

Tapered and Rockered Tips and Tail

The moderately tapered tips and tails of this ski allow you to ride smoothly through powder or bumps by keeping the tail in the snow and preventing the tip from easily diving into the snow as you ski. The rocker in the ski’s tip and tail, on the other hand, greatly aids in the ski’s maneuverability as well as its playfulness. Finally, the camber underfoot of the Kenja exists primarily for two important reasons, namely to enhance the ski’s edge hold and increase its ability to rebound easily.

The Kenja is engineered with a multiple layer wood core made up of poplar and beech woods (Sensorwood). In addition to being very durable and adding to the overall strength of the ski, this core contributes massively to the ski’s consistent flex.

The Kenja’s full titanial layers coupled with its multi-layer wood core gives it stability and outstanding edge hold in any snow conditions. The titanium is also responsible for the remarkable power that the Kenja is noted for. 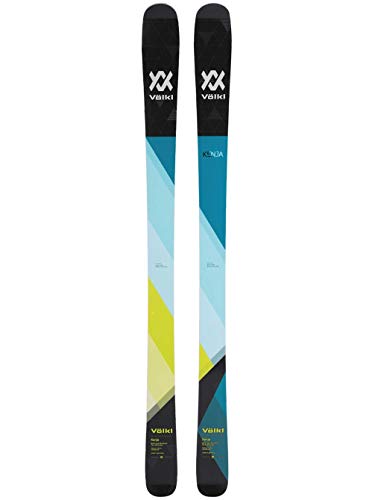 Q. Who are the manufacturers of this ski?

A. This ski is the product of the German based sports equipment manufacturer, Völkl. The company has been in business since 1923.

Q. What skill range is the ski perfect for?

A. This ski is suitable for aggressive skiers – skiers whose ability levels range from advanced to expert. However, despite not being a ski designed for a slow skier, it turns out that the Kenja is much easier to ski than others in its category.

Q. Does the Volkl Kenja Women’s Skis come with bindings?

A. No. You’d have to purchase your own bindings.

A. A number of things separate this new version from the older versions. For example the 2016 version comes with a narrower waist of 87mm and a flat tail, whereas this new version has a 90mm waist and features a tail rocker. Also, this new model is more versatile and performs better on moguls, in trees and on firm groomers.

Q. How stable is the Volkl Kenja Women’s Skis at high speeds?

A. It provides an outstanding stability and minimal chatter at high speeds, which is why it is greatly admired by freeriders who can’t seem to get enough of speed.

Q. How well does the Kenja handle turns?

A. Thanks to the Kenja’s rockered tip and tail, it handles turns very well.

Q. How does the Volkl Kenja Women’s Skis perform in soft snow?

A. It has no problem excelling in soft snow thanks to attributes such as its 90mm waist and its rockered tip and tail along with a cambered underfoot.

Q. How playful is the Kenja?

A. The Kenja is more playful and maneuverable than other skis of its caliber. The playfulness and maneuverability are largely due to the freeski tip and tail rocker it features.

A. The Kenja is nothing short of a fun ski.

Q. What’s the width of the ski’s waist?

Q. How does this ski perform on uneven snow?

A. The ski is designed not to slow you down on uneven snow.

Q. Does the Kenja hold an edge very well?

A. Yes. Thanks to such things as the cambered underfoot and sidewall that runs the ski’s entire length, it offers a fantastic edge hold.

Q. What bindings would you say are very compatible with the Volkl Kenja Women’s Skis ?

A. Some of the bindings that work very well with this ski include the following: the Salomon STH WTR 13, the Marker Griffon and the Tyrolia Attack 13.

Q. Is the Kenja warrantied?

A. Yes. The manufacturers, Völkl, support it with a 1-year warranty.

The interesting thing about the Kenja is that it is designed in such a manner that the harder you push it, the more it excels. It is indeed a fun ski to ride for a skier who loves speed, which is why we think if you are an aggressive female skier who is looking for a pair of skis that would offer you the versatility and power that you need to thoroughly enjoy that adventure that you are looking for on the mountain, then the Volkl Kenja is something that is worth considering.

Furthermore, unlike many other similar skis, this one feels perfectly at home both on and off the groomers, thereby allowing you to enjoy skiing across a variety of terrains.

And what’s more, each pair of Völkl ski that you buy comes with a 1-year warranty to give you some peace of mind during your adventures on the slopes.

Let us know what you think of theis pair of skis. If you liked what you read, don’t forget to share it. It really helps us a lot.

Stay tuned for more ski reviews. Sign-up for our newsletter!

By continuing to browse or by clicking “Accept Cookies,” you agree to the storing of first- and third-party cookies on your device to enhance site navigation, analyze site usage, and assist in our marketing efforts. Read Privacy Policy