Since its recent introduction into the market, the Nordica NRGY 90 Skis Black Men’s has made a name for itself as one of the most sought-after all-mountain skis. This post is designed to inform you about every important thing you need to know about the Nordica NRGY 90.

In the process of shedding light on this noted pair of skis, we shall be taking a look at things ranging from the key features of the ski, to its specifications, to its pros and cons.

It is likely that by the end of this highly insightful review, you’d understand why the Nordica NRGY performs better than many others in its class and why you should consider it for your skiing adventures if your skiing ability level is from Intermediate-Advanced.

Not all skis come with the unique ability to float well in soft snow and powder while at the same performing brilliantly on groomed snow, but the Nordica NRGy 90 does! With a waist width of 90mm, this ski has a wide enough width that creates a bigger platform to enable it to float much better in powder than many in its class. In addition to its substantially wide width, the 25pct rocker (CamRock technology) in its tips and its tapered tails contributes significantly in enhancing its ability to float and ski very well on ungroomed terrain covered with soft snow.

The full ABS sidewall, which runs the entire sides of the Nordica NRGY 90, is responsible for giving it the outstanding edge control and stability that it is widely noted for. These ABS sidewalls incorporated into the ski not only make it torsionally stiffer and allow it to have a better edge grip but also increase its ability to reduce the effects of hard landings while at the same time reducing vibration fatigue that accompanies most skis out there. Furthermore, the ABS helps in protecting the ski’s core.

Titanial Layer for Power and Stability

Thanks to the titanial layer that the Nordica NRGY 90 comes with, torsional stiffness and strength to the ski are at their peak. The result is more stability and power at high speeds. And what’s more, this layer has been designed in such a manner that it doesn’t add too much weight to the ski. Simply put, it is lightweight yet doesn’t sacrifice performance.

The core of the Nordica NRGY 90 is made of the revolutionary i-Core Torsion Bridge Ti which gives the ski the advantages of a ski with metal construction. One such advantage is a stiffer flex which greatly helps in the reduction of vibrations “chatter” at the tips of the ski during high speeds. And the best part is that it doesn’t come with the disadvantage of being heavy – a problem that often accompanies traditional skis that incorporate metal into them. 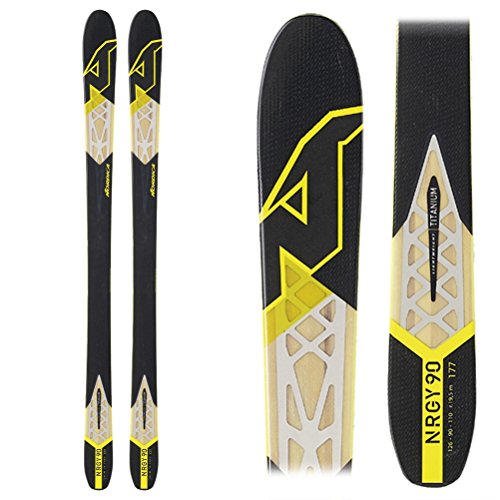 Q. Who are the manufacturers of this ski?

A. It is manufactured by Nordica – one of the world’s leading manufacturers of ski boots, skis, and skiing accessories. Nordica is presently headquartered in Giavera del Montello, Italy.

Q. What colors can I get the Nordica NRGY 90 skis in?

A. You can get these skis in the following colors: Flat Black/Yellow and Blue/Yellow.

Q. How stable is the ski at high speeds?

A. Owning to several features, most notably the titanial layer and the i-Core Torsion Bridge Ti, the Nordica NRGY 90 holds an edge and doesn’t chatter too much at high speeds. It also allows the skier to keep it under control at such speeds.

Q. Is this ski good in soft snow?

A. Yes, it is. The rocker, which enhances floatation, helps in preventing the tips from sinking deep in soft snow, thereby making the ski perform excellently on powder.

Q. Does it carve very well?

A. About carving, this ski does that brilliantly well thanks to the CamRock technology (rockered tips and cambered underfoot) that it is engineered with.

Q. How does it perform in crud?

A. While crud isn’t the most desirable terrain to ski, skiers often have to deal with it from time to time, and that is why the Nordica NRGY 90 is designed to take care of the skier both on and off the groomed trails. All in all, this ski performs well in crud thanks to its rocker tips as well as a wide waist that greatly enhances floatation and plow through crud and other types of unfriendly snow!

Q. Is this a playful ski?

A. This ski is generally more playful than most of its counterparts on the market not only because it is easy to use but also because of features such as its lightweight construction, rockered tips, and cambered underfoot which gives it a good pop at the end of a turn.

Q. Does the Nordica NRGY 90 come with bindings?

Q. Does the ski come with a warranty?

A. Yes, it does. If you purchase the ski from an authorized dealer, you get to enjoy a 1-year warranty.

There are indeed several types of amazing skis available on the market for purchase, and it is also true that the Nordica NRGY 90 is an example of a good ski. Check price here.

If you are an advanced or an expert skier looking for a great pair of all-mountain skis that will offer you all the power and control that you need downhill, then the Nordica NRGY 90 will make a good choice.

Indeed with all the fabulous features, this ski is engineered with, it isn’t surprising why it has no shortage of admirers the world over.

Let us know what you think of these skis. If you liked what you read, don’t forget to share it. It helps us a lot.

Stay tuned for more ski reviews. Sign-up for our newsletter!